Pani-Puri Squads To Be Aided By Shiv Sainiks In Mumbai

The special squads of Brihanmumbai Municipal Corporation to curb on the illegal panipuriwalas, will have a company in the form of Shiv Sainiks.
The Sena activists will accompany government officials to inspect the food stalls and they have asked the BMC officials to make random raids, not disclosing the area. 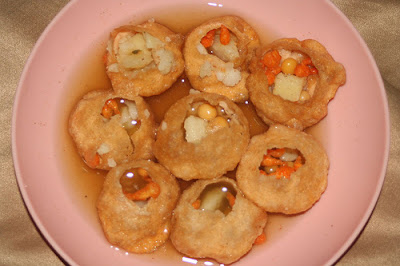 “There is a strong nexus between people in the BMC and stall owners. Once they (Stall Owners) get to know which area the officials are going to raid, that certain area gets cleared in no time. Due to this, the real culprits never get caught and the condition remains the same,” said Pandurang Sakpal, Sena zonal head, South Mumbai.
“We have decided to deploy our men with the BMC’s medical officers inspecting food stalls in south Mumbai. Many of the stalls set up in South Mumbai are illegal and many of these stalls do not maintain hygiene,” said Sakpal.
Sena does not want to give credit to the Maharashtra Navnirman Sena for bringing up the issue. On Friday, MNS activists attacked panipuri vendors after a panipuri vendor in Thane was seen peeing into a small utensil that was then used to serve customers.