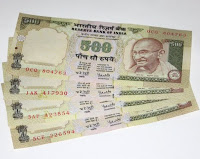 The Indian rupee opened 2 paise lower at Rs 45.64 per US dollar in early trade on the Interbank Foreign Exchange today amid demand for the American currency from importers and appreciation of the greenback against other currency rivals overseas.

The rupee had strengthened by 13 paise to Rs 45.62/63 per dollar in the previous session. Forex dealers said gains registered by the dollar against euro overseas, in addition to demand from importers, mainly weighed on the rupee sentiment.

However, a higher opening in the stock market and closure of Asian markets to mark the Lunar New Year restricted the rupee losses, they said. Meanwhile, the Bombay Stock Exchange benchmark Sensex rose by 57.32 points, or 0.31 per cent, to 18,147.94 in opening trade today.