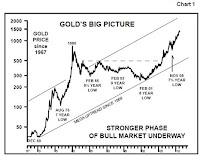 If we had to pinpoint a time during the last 10 years when the gold price broke out into a full on bull market, it was in 2005 when the $500 level was clearly broken. That was a key level at the time and this break out coincided with the launching of gold’s ETF, GLD.
It was also clearly a break away from the dollar as gold began jumping up in all currencies. This is when the bull market started heating up and gold never looked back until it surpassed the 1980 record high in 2008.
The financial crisis pushed the gold price down in the sharpest correction in the bull market, yet gold closed 2008 up on the year, which was only bettered by bonds at the time. Most impressive, it didn’t take gold but a few months to reach a new high once again.
Most important and the reason why we are going over the bull market is because the gold price has been on a tear with not even a 14% decline since the crisis low in Nov 2008. Gold entered a stronger phase of the bull market along the way in September 2009, and once again it never looked back.
Posted by Zex Arya Gharti at 2:07 PM